On February 28th 2020 Dean Graziosi is doing a Live Free Training with Tony Robbins and Russell Brunson. People pay over $2.000 to watch Dean’s & Tony’s Seminars and Today you have the opportunity to get coached by Dean & Tony Live. 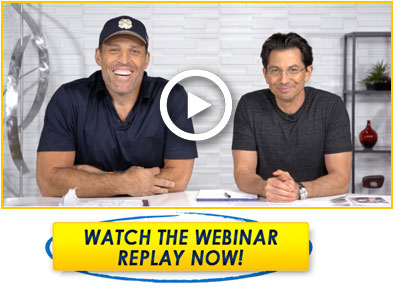 Note: The Webinar Replay is Available on during the next 24 hours.

If you are wondering ‘How Much is Dean Graziosi Worth?’, you are in the right place to find the answer to your question. But first, let’s see who is Graziosi. Dean Graziosi, it’s a famous entrepreneur, author, speaker and trainer with a big net worth. He is considered the top-ranked real estate educator worldwide and a successful businessman. Before we see how much it’s his net worth, let’s learn more about him, his career and how he managed to become this rich from the rag. 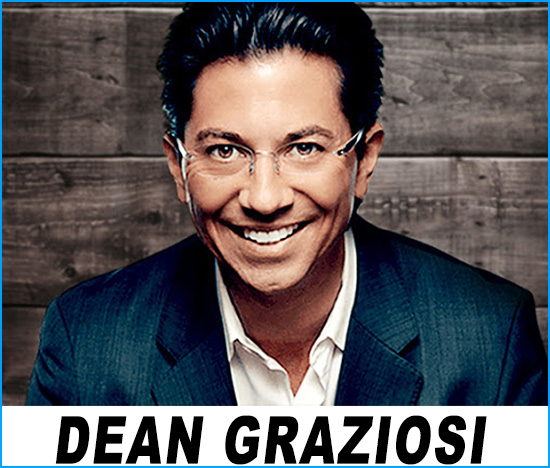 Dean has begun his career at 20 years old with his own business. He purchased, repaired and resold old cars. This proved to be a profitable business. He bought old cars at low prices and sold them afterward with profit. It was slow work, but with low-risk high reward. While he was doing this, he also developed an interest in real estate. After a few successful real estate investments, Graziosi created his first training, titled Think a little different. After a couple of successful years with this training program, he wrote his first book, ‘Totally Fulfilled’, published in May 2006 by Vanguard Press. The book hit the New Yor Times bestseller soon after its release. The book explained Dean’s approach to optimal results, success and fulfillment not only in the real estate business but also in personal life.

Graziosi’s second book it’s ‘Be a real estate millionaire: secret strategies for lifetime wealth today’, that was also published by Vanguard Press. This was another hit, being the best-selling real estate book in 2007 and 2008 and was listed as a bestseller in New York Times, USA Today, Wall Street Journal and Amazon.com.

In January 2009, Graziosi published his third book, ‘Profit from Real Estate right now’, another immediate hit which in 90 days from the release managed to subclass the previous book’s sales. The book teaches massive wealth in the down real estate market, which it’s an opportunity to get rich.

After this, he started presenting motivational speeches. In 2010 he teamed up with a company specialized in managing and running live events. He hosted live events in many cities across America, becoming the best Real Estate live event training company in America in 2011, at just one year from when he started this.

Dean appeared also on TV for over 15 years. He created ‘Motor Millions’, his infomercial in which he talked about how you can earn money from buying and selling cars. His experience from the start of his career helps him providing accurate Infos about this subject. He also appeared on screen on several occasions, probably more often than many celebrities. He was broadcasted on almost every major TV station from America.

He also sells online courses which are a big success.

Since 2008 Dean Graziosi produces a successful Weekly Wisdom video blog in which he shares weekly insights and strategies for high performance in all the areas of life.

He also does charity work. Is the co-founder of The Centurion Mastermind Group that donated over 1million $ to Virgin Unite, a charity organization.

In 2007 Graziosi founded Operation Free Home, which provides people in need a home to live in for free, for one year.

He also uses to donate to people who pass through different unfortunate events, like the ones affected by Tornado hits or Hurricane Sandy, for example. 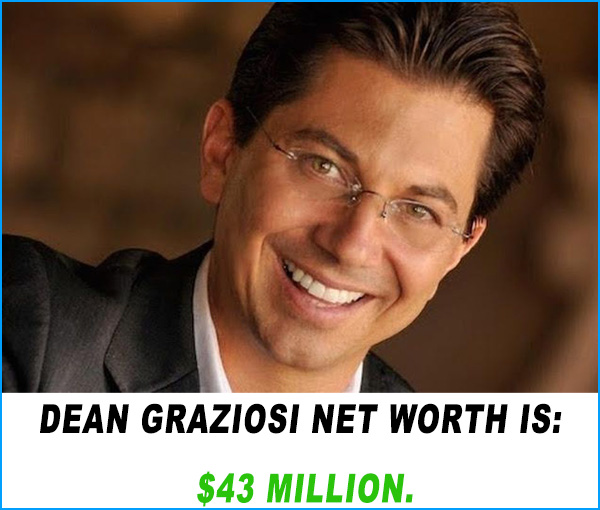 Dean Graziosi has an estimated net worth of 43 million $. His primary source of income it’s the real estate business, but he also gains from online, video and audio courses, his printed books, training.

He owns multiple companies. In 2002 he founded Dean Enterprises, LLC which produces all of Graziozi’s infomercials, books and his online platform, a free social community and real estate tool for anybody.

Another company that he owns its JBB Enterprises, LLC, that manages his real estate investments. He does hundreds of real estate deals every year because that it’s helping him stay present in the market and updated with the latest trends, that help him with the accuracy of the training and speeches that he holds.

About his personal life

The first interesting thing about Graziosi’s personal life it’s that he never finished or attended college because of his financial struggle, but this did not stop him to become the successful businessman he is now.

He was born on November 20, 1968, and was raised in Marlboro, New York and it’s the son of Paul Graziosi and Gloria Post. At the age of 3, his parents divorced and he was raised mostly by his mother until the age of 13 when he moved with his father. His family struggled financially and they were forced to move almost 20 times until he reached the age of 19 years old. He graduated from Marlboro High School and, as I mentioned earlier, he never went to college. He struggled with the financial issue in his childhood and teenage years, and he had to self support him from a younger age, that it’s the way he chose to start his own business at 20 years old. Also at 16 years old, he started to sell the wood to get a little extra cash. Life was not easy for him as he was continuously burdened with financial constraints but he never gave up. He maintained his positive mindset and this helped him. 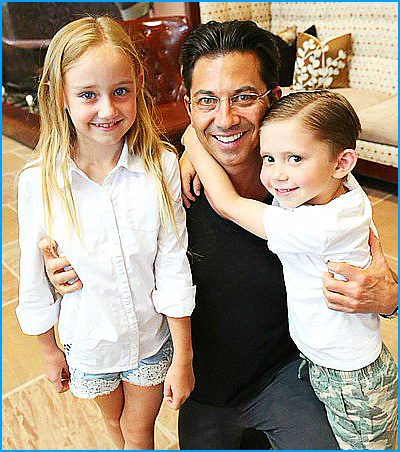 He lived in Phoenix, Arizona and he was married to Joenelle Ward, which whom he had 2 children: Breana born in 2006 and Brody, who was born in 2008. His wife was very supportive, according to him and they had a beautiful relationship until their divorce in 2017. They didn’t make public the reasons for divorce and this was not a surprise since they kept their private life away from the public eyes. However, after their divorce, Dean spoke about it in 2018. He declared that it was a taught time for him, bringing him back memories from his childhood when his parents divorced. He blamed himself for screwing up his marriage and had a hard time dealing with it, destroying his self-confidence. But he managed to regain the confidence in himself and get past the divorce. Now he is married to Lisa Palacios, a 34 years old podcaster. They got married on 22nd August 2019 in Italy. 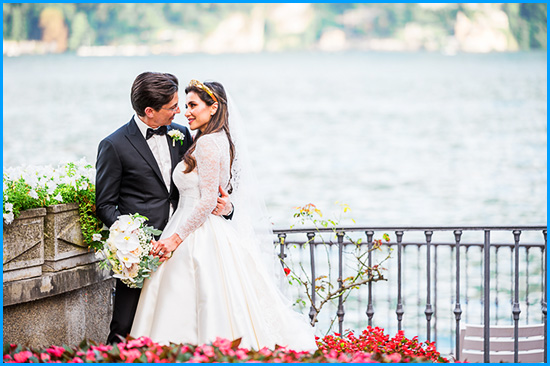 He is so well known because of the fact that he took the knowledge he gained over the years and shared it with others that wanted to be successful and build financial security for themselves. He has a human way of approaching real estate investing and this is what made him successful. He reached millions of people from the entire world with his book, online courses, audio, and video courses.

From his entire work, you can learn numerous lessons from Dean Graziosi, regarding business but not only.

One of the lessons it’s that, you must be confident in order to succeed. Nobody wants to do business with someone insecure. You must obtain confidence by learning from others, study, practice and improve, according to Dean.

Another lesson it’s put simple Heart over Head. Graziosi encourages you to stop overthinking, overanalyzing and just do what your heart tells you.

In the third lesson, we will mention it’s learning to say no. According to Dean, this will make you wealthier. You have to be more selective and learn to say no.

They are many lessons you can learn from Dean Graziosi and these are only 3 examples. 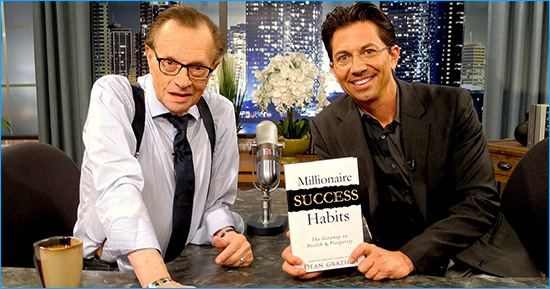 Dean Graziosi, it’s the perfect example of how you can build your own success. He started dyslexic, broke, coming from a family with financial struggles. Today has an estimated net worth of 43 millions$, he is known worldwide and has a beautiful family. And he made a statement that sums this up very well: ‘ It doesn’t matter where you are coming from. It only matters where you want to go.’ And he has proven to us that he is right. With a hard background, he managed to change the odds in his favor, become wealthy and helping others getting wealthy.

He took control over his life and hid mindset and didn’t let his family struggles to stop him from achieving success. Due to his own experience, he has a human approach that makes it easy for him to teach other people how to make the best of their careers and personal lives. He works tirelessly and he is focused on self-improvement and personal growth. These are the main factors that contribute to his success in the long run. He manages to keep his motivation and positive attitude regardless of the situation.

Disclosure: I am an independent Mastermind.com Affiliate, not an employee. I receive referral payments from Mastermind.com. The opinions expressed here are my own and are not official statements of Mastermind.com or its parent company, Mastermind.com LLC.
This site is not a part of the Facebook website or Facebook Inc. Additionally, this site is NOT endorsed by Facebook in any way. FACEBOOK is a trademark of FACEBOOK, Inc.